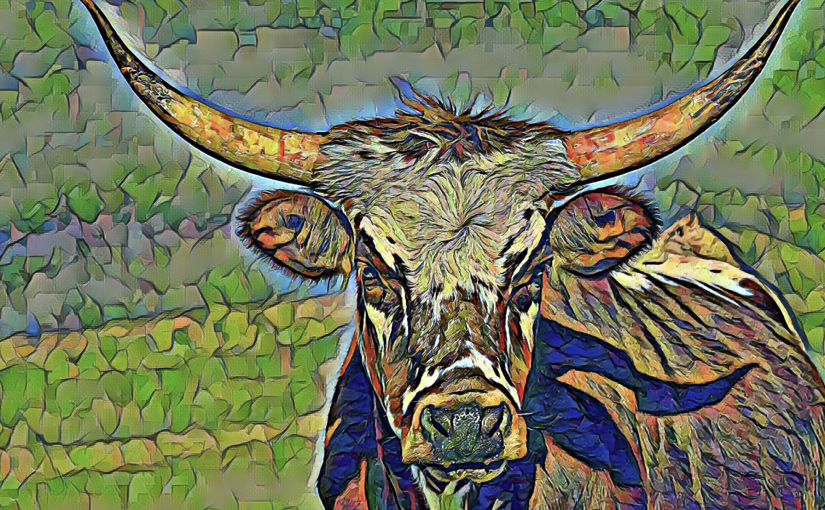 Humans have been fascinated by aurochs for tens of thousands of years. They’ve been depicted in cave paintings found in Europe. Though cattle were domesticated around ten thousand years ago, we are still mesmerized by images of the powerful, mighty bull.

Bull is associated with the traits aggression, stubbornness, stamina, and rage.

Picture a matador facing off against a bull. The bull snorts and dips his head, issuing a challenge to the man. As the man nonchalantly waves his red cape, the bull stamps his front hoof several times and readies his charge.

Like that bull, those who channel Bull’s power are in need of some aggression. Perhaps you have a dream, a goal from which you have put off pursuing, but must start soon or else it would be too late. Call upon Bull to borrow his assertiveness and chase your dreams.

The ox, which can be interpreted as Bull, is the second animal in the Chinese zodiac. The year of the ox was associated with ambition. It was during the year of the ox when diviners suggested heavily pursuing your dreams and plans. When the twelve animals of the Chinese Zodiac raced each other to determine the sequential order, Bull charged his way to the front, leading the way through the entire race only to lose at the final moment after inadvertently carrying Rat to the finish. If channeled correctly, Bull can guide you across the finish line to your dreams.

But there’s a reason why in real farms, herds of cattle are only dominated by one Bull. Whereas cows and steers are docile and easy to control, the mighty bull is bossed by no one, lest a naive ranch hand risks being gored attempting to do so. People who have close affinity to Bull often channel his stubbornness, whether they mean to or not.

Bull is often the biggest and strongest animal on his farm, much like a stubborn person is sure and set in their beliefs. In fairness, their ways have successfully gotten them to where they are, so staying the course does make the most sense, most of the time. However, that conservatism leaves very little room for flexibility, so it can be quite difficult to get them to change their minds, even when doing so would greatly help the Bull channeler and the ones around them.

People born under the constellation Taurus are stubborn and conservative, but also dependable and loyal. Taurus is symbolized by Bull, and he passes on his traits to those under his star sign.

Bull’s stubbornness is also his source of great loyalty and dependability. Though there are indeed times when Bull people could use some fresh ideas, they would also remain loyal to those around them through thick and thin. Rest assured, your Bull friends and family will support you through your times of most dire need.

Which brings us to Bull’s stamina. With Bull by your side, he will give you full support throughout your entire ordeal. Think back to the bull facing off against the matador. The bull charges, again and again, with the matador only barely getting out the way each time. It’s tiring to be on the front foot of the attack every time, but the bull gives it his all with every charge. That is the kind of support Bull provides.

The flip side of Bull’s medicine however, is the rage that fuels his fanatical attack. It’s great when your Bull person channels that against your adversaries, but Bull can be as ornery as he is loyal. Do be mindful if you call upon Bull’s guidance that you don’t inadvertently hurt your loved ones. Not only could this manifest itself in physical harm, but words have a way of bringing others pain just as much. Do not be the proverbial “bull in a China shop,” and trample your loved ones’ feelings if you can help it!