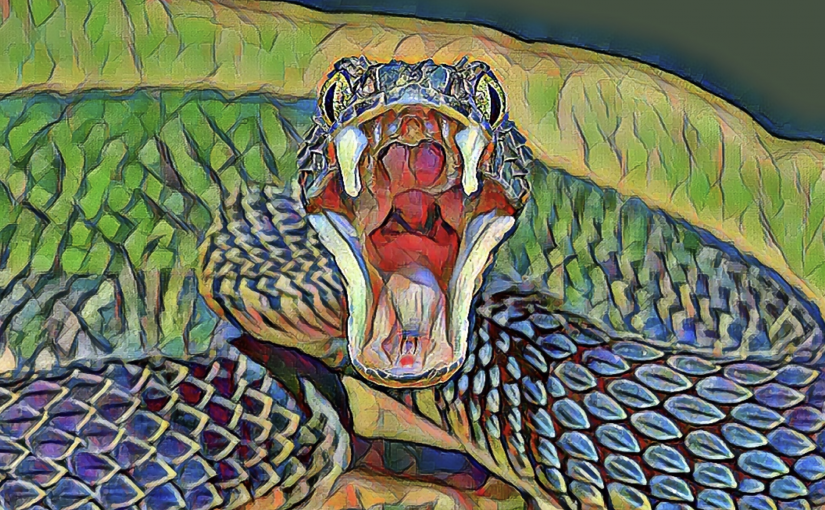 As Snake sheds its skin so we can shed our illusions and limitations. Then we are able to use our vitality and desires to achieve wholeness.

Snakes deserve respect. Throughout history the snakes have had many legends surrounding them, linking them to creation, fertility and transformation. Nowhere are the differences between cultures and religions more sharply emphasized than in their attitudes towards Snake, differences which will also uncover different vistas on elementary aspects of being alive.

On one level, the differences relate to sexuality. We see the snake enticing Eve in the Garden of Eden, being symbolized as Vinata the Indian goddess, or shown as the legs of Cernunnos the Celtic fertility god. In Hinduism, kundalini, or serpent fire, is coiled at the base of the spine. As we mature emotionally and spiritually, the energy rises, stimulating the chakras, which are emotional, mental, and spiritual energy centres. This is also shown in the worldwide symbol of the spiral. This flow of energy is indispensable for good health, and the Greeks, in their own understanding of this, used the snake as a symbol of healing and wisdom.

In Israel the snake was regarded as the earth mother and played a role in fertility. In Egypt the cobra was known for its ability to expand the upper neck into a disc shape by spreading its ribs, symbolizing immortality. Snake was also considered to represent inner vision. Christian lore sees the snake rising from the chalice of St. John, wound around a cross sometimes portrayed with a woman’s head to depict lust and temptation.

For time immemorial people have associated Snake with both male and female aspects of sexuality. In religions where sexuality, in both its physical and spiritual aspects is celebrated, Snake has been held with honour. More repressive belief systems have linked snake to evil.

The Celts sometimes called the Druids, leaders and teachers in poetry, music, the law, spiritual wisdom, and healing, adders. Sadly, the more stiff practitioners of the Judeo-Christianism seemed to fear wisdom. When St. Patrick bragged that he had driven all of the snakes out of Ireland, he meant the Druids. The apple the snake gave Eve was from the Tree of Knowledge.

This is just a start to the contradictory attitudes towards Snake. The snake also represents aliveness, as expressed in sensuality – in this case meaning feeling and responding to stimuli, and more generally, to the flow of energy which creates us and makes us alive.

When snakes shed their skin, they metamorphose into a new being. This is very significant to those with snake as power animal, symbolising our ability to shed beliefs and habits which we have outgrown, moving into higher spiritual energy. The ability to do this is wisdom.

The shedding of the skin is also associated with astral travel and out of body experiences. The eyes of a snake are always open and are protected by immobile transparent scales. Before shedding their skin the snakes markings become obscure and the eyes appear opaque or blue, giving them a trance like appearance as if they are looking right through you. Learning how to see into the hearts of others is part of what we are taught by snake.

On the deepest level Snake’s skin shedding symbolizes death and rebirth, an idea which is depicted by the image of a snake swallowing its own tail, a symbol of eternity. The Snakes medicine is not to be treated lightly. Its meaning touches on the deepest mysteries in life. If you are ready to shed your own skin, Snake is ready and waiting to guide you through the spiral path of transformation. On a material level snake is vitality, on an emotional level ambition and dreams, on a mental level intellect and power, and on the highest level, the spiritual level wisdom, understanding and wholeness.

Snakes / serpent’s power includes – Being the messenger of the Rainbow Serpent, wisdom, healing, initiation, elusiveness, manipulation of lightning, transmutation, exploration of the mysteries of life, primitive or elemental energy, protection from religious persecution, goddess energy, psychic energy, creative power, immortality and the connection to, or forming, the magic cord by which the shaman travels to the soul world. Snake medicine is the energy of wholeness, cosmic consciousness, and the ability to experience anything willingly and without resistance. It is the knowledge that all things are equal in creation, that all is one.

Snake is a powerful animal guide, a symbol of transformation and healing. The snake is wisdom expressed through healing. This is a protector and guardian. If snake has come into your life, your creative forces are awakening. Your intuition will strengthen and be more accurate.

When on the move snakes make no noise whatsoever. They are invisible when resting and are unable to produce their own body heat, often to be seen lying in the sun. The suns warmth together with their behavior regulates their body temperature. They don’t rely on the energy of food to generate body heat and can survive on scanty diets for long periods of time. Those with snake as power animal need very little food for energy. They are usually cold, with body temperatures below average, and prefer warmer climates.

Snakes do not have eardrums nor external ear openings. Instead they have small bones in the head that conduct sound. They can hear low frequency sounds and sense vibrations that travel through the earth. This links them to the underworld where secrets are kept.

The snake depicts healing on a cellular level. With their lightweight and flexible bodies they possess extremely fast and agile. If snake enters your life, expect swift changes to sweep through your life. These changes denote death of the old and a birth into untapped power, creativity and wisdom. Snake is very powerful to have to have as a guide. It is the guardian of sacred places and the keeper of concealed knowledge.