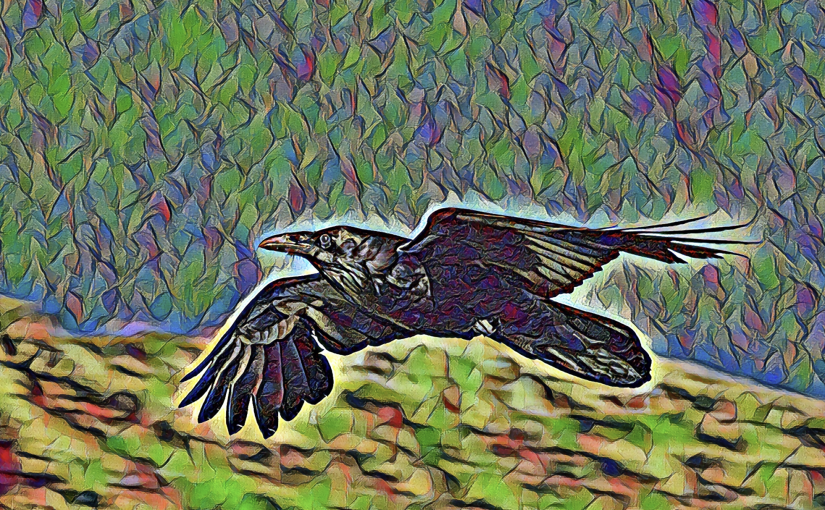 The largest songbirds in North America, Ravens are highly intelligent and clever mimics. They mimic and use the calls of other species in their own ’vocabulary’ and can show us how to understand ‘animal language’. Ravens have been known to learn some human words also. Early Europeans feared the Raven and regarded them as bad omens, because they would feed on the corpses of the dead hanging on the gallons. Truth of the matter is, the Raven – like all wildlife and nature – should be respected, not feared.

Ravens bear magic and mysticism, and have a long history of myth enshrouding them. Shamans know the power of an unexpected piercing sound in shifting consciousness. Ravens have this power, giving out varied sounds, and can assist us in shifting our consciousness into various dimensional realms. Hence this is a reason why the raven is referred to as a shape shifter with magical powers. ‘Raven people’ can expect continual changes and spiritual awakenings throughout their lifetime.

Some native tribes refer to them as the ‘keeper of secrets’. They are linked to the void, where universal secrets are kept. Obviously, their black colour is the colour linked to darkness, the place where unconscious fear resides. Ravens are master magicians and represent transformational energy, revealing to us how to rid ourselves of our inner fears. Raven will show you how to go within in yourself, into the dark areas and then illuminate them, making you ‘sparkle’ and bringing out your true self. Inner conflicts should then be resolved, however long buried they are – this is the deepest healing.

If raven has flown into your life, then magic and healing abound. Raven awakens the energy of magic, linking it to our will and intention. With Raven, you have the ability to make great changes in your life – now is the time when you can take the thought and make it reality. Raven knows the mystery of life, they are strongly linked with death and rebirth. Remember not to be fearful of Raven, rather give thanks for the teachings he brings. Raven chooses its student according to their knowledge. They usually stay as long as needed to help transmute karma, returning you to the light. They will lead you into the discovery of your multidimensional self and reunite you with the secrets of the multidimensional universe.