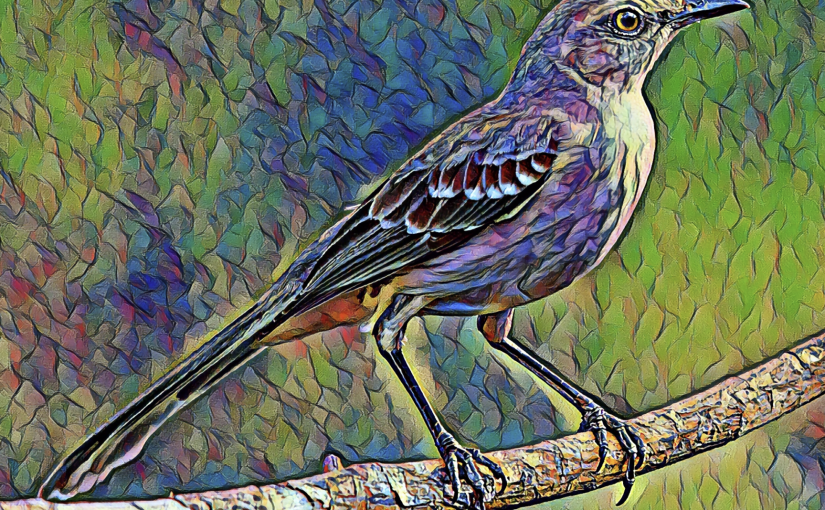 Mockingbird’s gifts include finding your sacred song, recognizing your innate abilities, using knowledge gained on the outside to heal the inside, learning through experience, curiosity, attitude, territoriality, overcoming fear, intelligence, power of song, confidence, master imitator.

The Northern mockingbird is around 10 inches long with a long tail that twitches vigorously when excited. Their long legs are perfect for looking through dead leaves and undergrowth for insects. Their dull grey colour certainly doesn’t grab ones attention, however, their various calls definitely do! The mockingbird is well known for its ability to copy the calls of other birds – and even cats and dogs – they are master imitators. The mockingbirds song is a combination of the calls of many other birds. Usually they repeat an imitation a few times before going onto other songs in quick succession. They have up to 30 songs in their repertory. Mockingbird is Latin for ‘many tongued mimic’. This is one of the few birds who sing whilst flying.

Mockingbird teaches many things – the power of song and voice is one. It can assist in learning new languages easily and to speak them fluently. People with this power animal often make excellent spokespersons and interpreters. They also help you find your ’sacred song’, your life’s purpose and inner talents. You will be given the strength to act on these fearlessly. Never forget that your inner song is always there, it cant be lost. If you miss one opportunity, another will always appear and that is just how it is meant to be or it wouldn’t have happened! You should ask for assistance in connecting with your personal sound frequency, for then healing will take place on all levels.

Mockingbird people are more known for their talents than how they look. Appearances are not important to people with this power animal. They are heard before they are seen – if they are seen at all. The mockingbird helps you to leave people and events that hurt you behind by seeing who and what they REALLY are. Everything in life is a lesson to help you grow, and even if you were hurt, this is but another lesson to learn and grow. Everything that happened to us in the past builds our character and who we are today. You will hear the true song of others and will follow your own path. Take what you can from a situation but always in a respectful and un-spiteful way. What goes around comes around. We are all here to learn form each other. Apply your creative imagination and intuition to all you do and you will live a life of harmony. On a subtle level, mockingbird shows us how to imitate ourselves, what we imitate reflects back to us and helps us see who we truly are. This can be a powerful transformational experience.

The fearless mockingbird defend their nests and territory, diving at and attacking predators and those who come too close. They teach us to develop self-confidence, to speak our truth and stand up for what is ours by right.