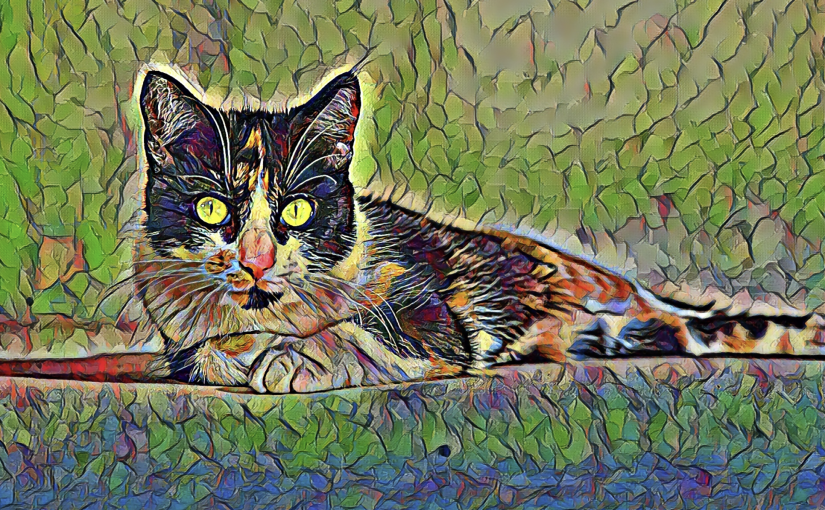 A calico cat has three distinct patterns on her fur: black, white, and orange. The vast majority of calico cats you have ever seen are all female, only 1 in 3000 calicos are male. This is due to the sex-linked nature of coat color for cats, similar to color-blindness for humans. Just the mere event of encountering a male calico cat required tremendous luck, hence the cat’s association with the trait.

That is why in Japan, the male calico cat is a symbol of fortune. Many Japanese storefronts have a figurine of a calico cat, and sometimes an actual cat, in hopes of good business. Japanese ships used to carry calico cats to channel good fortune at sea.

Calico cats are house cats, so their medicinal traits of wholeness, independence, curiosity, many lives, cleverness, love, mystery, and magic all still apply. Just expect a layer of luck and fortune, both good and bad, to be associated with all of those.

For instance, the male calico’s curiosity power will allow you to uncover many mysteries regular cat medicine will not. Those associated with male calicos will also have more success in their independent lives too. Particularly, financially.

But there is a flip side, because the harder they rise, the harder they fall. Luck and fortune comes in good and bad, and when male calico cat medicine strikes bad, you will burn through one or several of your many lives. Sudden fortunes can be lost just as quickly as well. The male calico is as clever as any cat, but becoming too reliant on his cleverness while making poor investments could result in a very hard fall.

Why are male calico cats so rare anyway?

To understand, one must realize calico cats only arise via a specific combination of genes from their X-chromosomes. That is, chromosomes in plural, meaning a male XY cat would never have the chance to be calico. That’s why most male calico cats are XXY, possessing both male and female chromosomes, while outwardly showing male physical characteristics..

Male calico cats literally embody the wholeness of the male and and female genders in their genes, and spiritually everything in between. Those gifted with male calico medicine may have the ability to love anyone along the gender spectrum, while also belonging anywhere along that spectrum as well. That is not to say the male calico power animal bestows upon everyone who has him the rare aspects of pansexuality and/or gender fluidity, but rather those who are pansexual and gender-fluid are likely to have the male calico cat as their power animal.

Such extreme wholeness comes with a price, however. Male calico cats suffer from health problems such as high body fat, shortened lifespans, bone fragility, and behavioral issues. With good care, however, the cats can still live happy and fulfilling lives.

We can extrapolate this into our own lives that while the good fortune of the male calico comes with a price, as long as we pay that price (within reason) we can still enjoy the benefits that male calico’s fortune medicine brings.

If the male calico cat is your power animal, you will likely live a very exciting and fulfilling love life. You may also have great fortune in your work life and finances. Just be warned that if gains from that luck and fortunes go unprotected, your life may burn hot and fast like a supernova only to fade away all too soon.